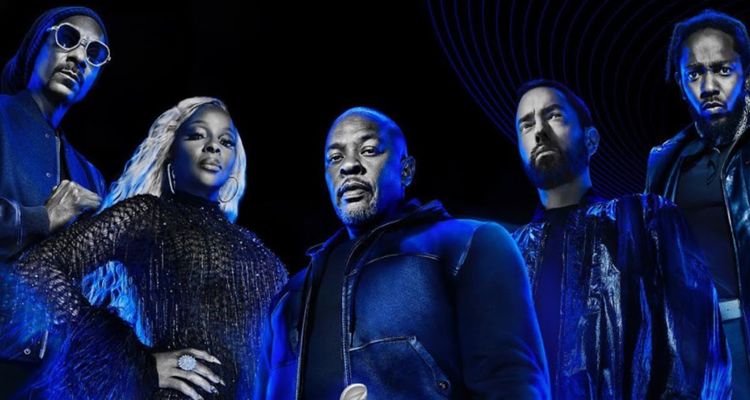 Reports surfaced that the NFL was against the idea of Eminem taking a knee during the performance. Other reports suggested the NFL tried to block Dre from rapping ‘still not loving police’ from his “Still D.R.E.” song, while also banning Snoop from wearing blue or “gang-related” clothing.
Instead, the Super Bowl Halftime show went ahead exactly as the performers planned. Eminem took a knee during his performance for almost a minute. Dr. Dre still rapped about not loving the police from his 2001 hit, and Snoop Dogg proudly wore a blue jump suit while performing a Crip walk on stage.
In an interview with TMZ yesterday, Dr. Dre confirms there were some minor changes. “There were a few things that we had to change, but it was really minor things,” Dre explains. “Em taking a knee, that was Em doing that on his own. There was no problem with that. I think that the beginning of Kendrick’s set, he says, ‘If Pirus and Crips all [got along].’ They had a problem with that, so we had to take that out. No big deal, we get it.”
Kendrick’s line form “Alright” where he says “and we hate po-po” was also censored from the performance. “Everybody came in, we were professional, everybody was on time and everybody really felt the magnitude of what this thing was and what we were going to be able to accomplish. It was a fantastic experience.”
Dr. Dre also reveals he hit up McDonald’s after the show and the headed to the studio to work on Mary J. Blige’s next album. “Mary came back here to the house last night, and we went downstairs to the studio,” Dre continues. “She was playing me samples, and we were just vibin’ out because we’re talking about working together on her next project.”
Your email address will not be published.