Turnt Media Turnt Media
Home Finance Did The Fed Just Set The Stock Market Up For A Crash? – Seeking Alpha

Nattakorn Maneerat/iStock via Getty Images
As noted last week, the more significant concern remains the underlying technical condition of the market. While the rally has been impressive, rising to all-time highs, the market is now back to more extreme overbought levels.
Furthermore, our “money flow buy signal” is near a peak and slightly triggered a “sell signal.” However, with the MACD still positive, the signal suggests a consolidation rather than correction. However, a confirming MACD often aligns with short-term corrections at a minimum. Therefore, we will watch that signal closely. Also, this entire rally from the recent lows has been on very weak volume, which suggests a lack of commitment. 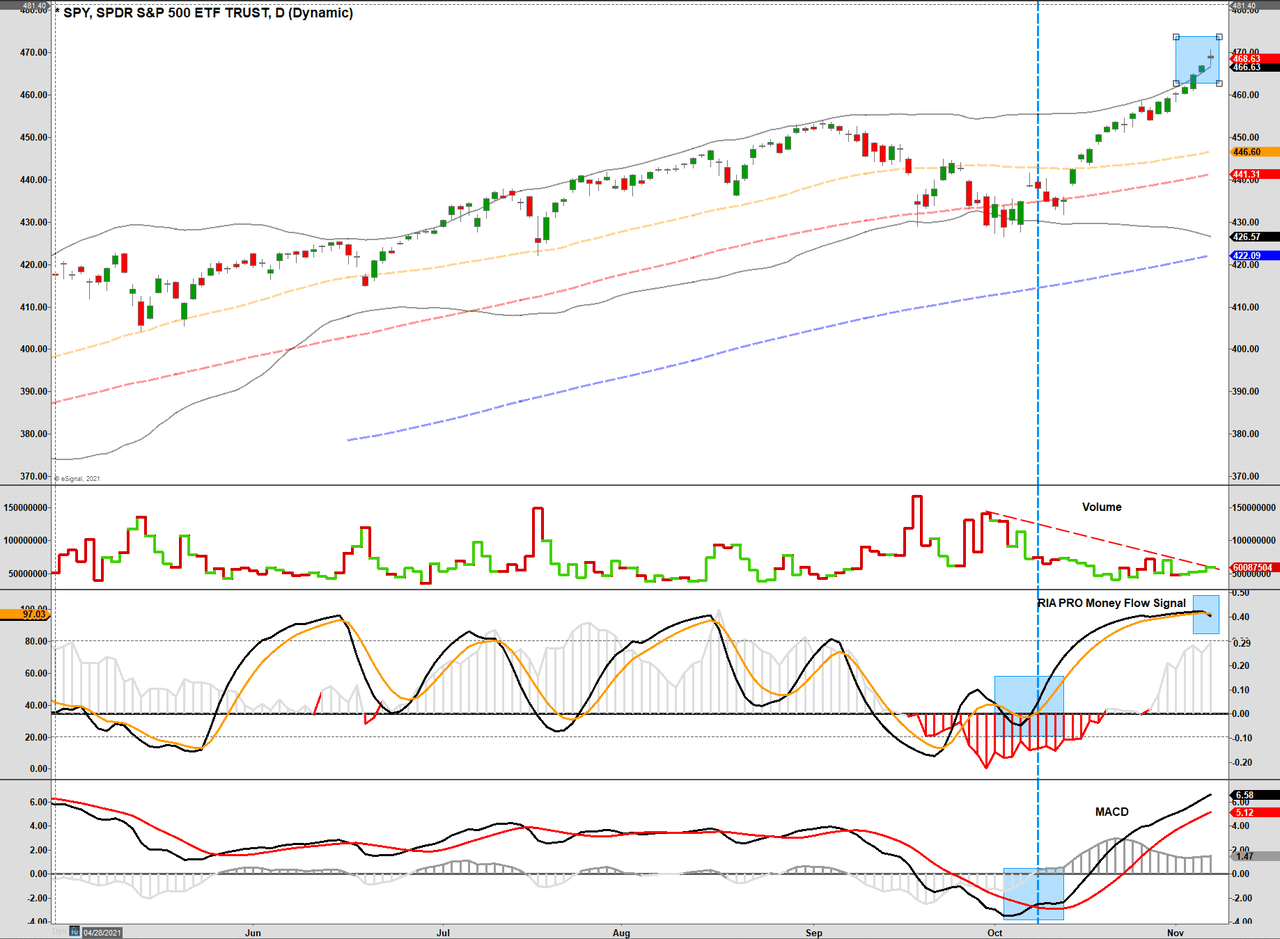 Of course, that stampede gets driven by exuberance.
In our daily market commentary, we quoted a piece of analysis from Chartr.com. To wit:
“Every week it feels like we get a new headline about financial markets doing something unusual. Just this week we’ve had:“
“All of which begs the question: are we in a bubble?” 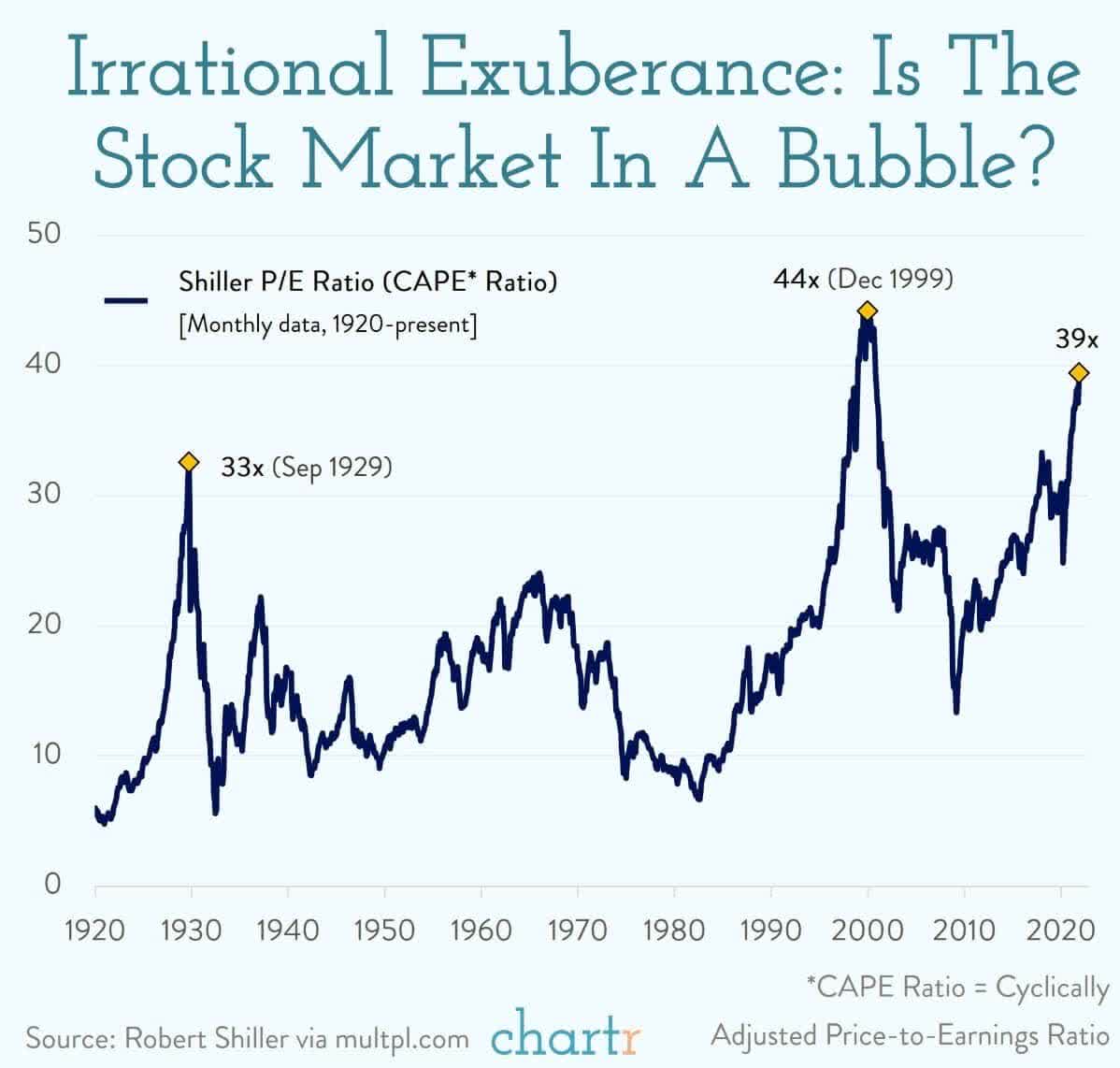 So where are we now? The latest CAPE ratio for the S&P 500 Index is 38x. That’s pretty close to the all-time record, which was 44x back in 2000. For those with a short memory, that was just before the dotcom bubble burst and stock markets (particularly tech) crashed hard.”
As we have noted previously, valuations, by themselves, are a terrible timing metric. However, they tell us a great deal about expected future returns and current market psychology.
When it comes to “irrational exuberance,” there are other indicators better at revealing speculation in the markets that have preceded a stock market crash.
The CNN Fear/Greed index is now at extreme greed territory.

Furthermore, the demand for protection against a stock market crash (put options) fell to new lows.

Historically, such periods of “speculative” activity led to a minimum of short-term stock market corrections, but a crash is not beyond the realm of possibilities.
As noted above, with the market extremely overbought, speculative activity surging, and conviction weak, taking some actions to rebalance and manage risk is warranted.
However, for now, investors have “no fear” as they believe the Fed will continue to remain accommodative.
My co-portfolio manager, Michael Lebowitz, made an important observation on Thursday.

“Jerome Powell made it clear the Fed is in no hurry to raise interest rates. ‘We don’t think it’s time yet to raise interest rates. There is still ground to cover to reach maximum employment, both in terms of employment and in terms of participation.’ The Fed’s reason is the employment picture is not back to pre-pandemic levels.
In our mind, there is plenty of evidence such as the outsize quits rate, rising wages, and the record number of job openings that scream the labor market is very healthy. Does Mr. Powell disagree with our assessment, or is there more to the Fed’s policy stance?
We believe he answered the question at Wednesday’s press conference. Per Jerome Powell:
‘The Fed’s policy actions have been guided by our mandate to promote maximum employment and stable prices for the American people along with our responsibilities to promote the stability of the financial system.‘”
The last sentence is the most important.
According to the Federal Reserve’s Congressional authorization, the Fed has only TWO mandates: price stability (inflation) and full employment.
The third mandate is a self-imposed mandate from Ben Bernanke, who was the Fed Chairman in 2010:
“This approach eased financial conditions in the past and, so far, looks to be effective again. Stock prices rose, and long-term interest rates fell when investors began to anticipate the most recent action. Easier financial conditions will promote economic growth. For example, lower mortgage rates will make housing more affordable and allow more homeowners to refinance. Lower corporate bond rates will encourage investment. And higher stock prices will boost consumer wealth and help increase confidence, which can also spur spending.”
Jerome Powell ignored surging inflationary pressures and a robust job market in favor of supporting asset prices. With valuations surging, speculative activity rising, and investors heavily leveraged, the Fed faces a difficult choice.
There is already a decoupling of markets from consumer confidence. A stock market crash would further devastate confidence pushing the economy into recession. That is the risk the Fed cannot afford. 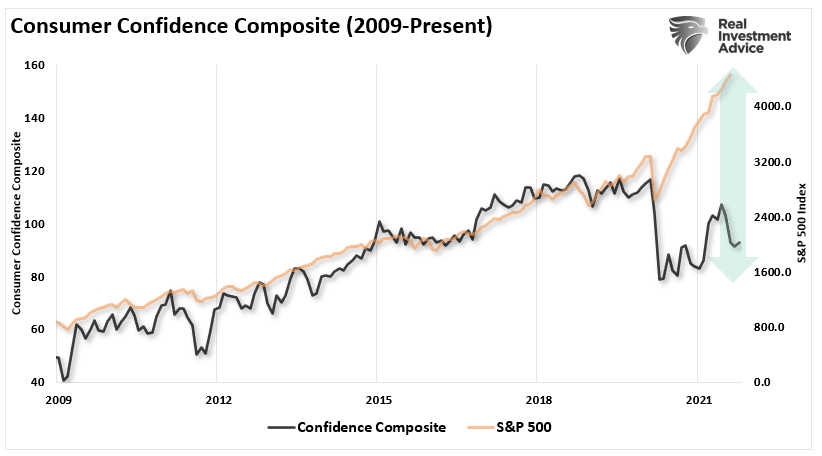 However, while the Fed remains focused on keeping markets elevated, inflation poses a significant risk.
Currently, with PPI at the highest spread to CPI in history, it suggests producers can’t pass on costs to customers. Such equates to weaker profit margins and earnings in the future. However, if they elect to pass those costs onto consumers, such will raise living costs well above wages.

“‘Promoting the stability of the financial system’ seems to be an unofficial mandate. Might the Fed be dragging their feet to reduce crisis-driven policy because they fear a stock market crash? More specifically, can extreme stock valuations be justified without an overly aggressive Fed?
The latest Fed meeting makes it increasingly clear that monetary policy changes are more a function of the asset markets and not the Fed’s congressionally stated mandates.”
Ignoring the inflation risk is likely unwise. Previous spikes in the inflation spread aligned with weaker economic growth, stock market contractions, or crashes.
While the Fed should be tapering monetary policy and hiking rates to prepare for the next recessionary downturn, they will opt to keep asset prices inflating. However, just as in the past, opting to keep monetary policy too loose for too long eventually triggers a more significant crisis.
While the Fed is busy supporting the equity markets, overvaluations, and speculative activity, the bond market has a different message. As discussed this past week, our expectation of weaker economic growth in 2022 is coming to fruition.
“The history of stock market crashes due to the Fed’s monetary intervention schemes is evident. Not just over the last decade, but since the Fed became ‘active’ in 1980.” 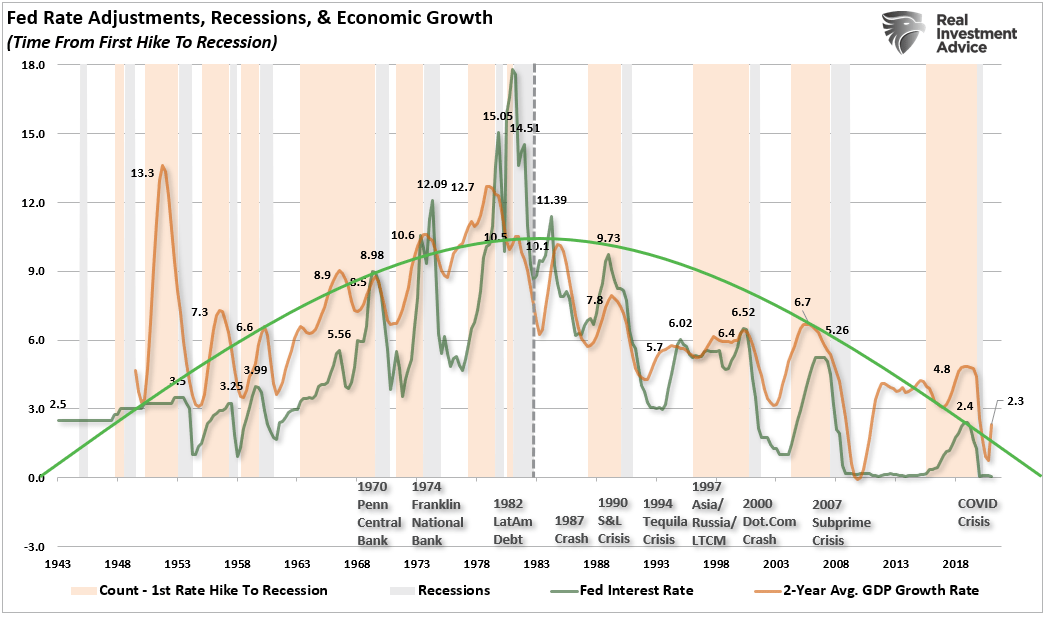 More evidence continues to support that view, as noted by the sharp drop in productivity despite jobless claims falling back to pre-pandemic levels. Thus, while the Fed hopes for “full employment,” such remains a function of “math” as the labor force shrinks.

More importantly, “real wages” are not keeping up with the inflationary surge.

Such will inevitably weigh on consumption which will weaken economic growth.
Are there currently risks to the bond market that investors should be concerned about near term? Yes. The current spike in inflation will likely last longer than expected due to the break of supply lines. Furthermore, rates tend to rise when the Fed begins to discuss “tapering” their bond purchases as they are doing now.
However, both of these issues will resolve themselves going forward. Eventually, the supply chain disruption will mend, and inflation will decline as supply comes back online.
More importantly, when the Fed does begin the process of “tapering” their bond purchases, yields historically fall as investors’ “risk-preference” shifts from “risk-on” to “risk-off.” 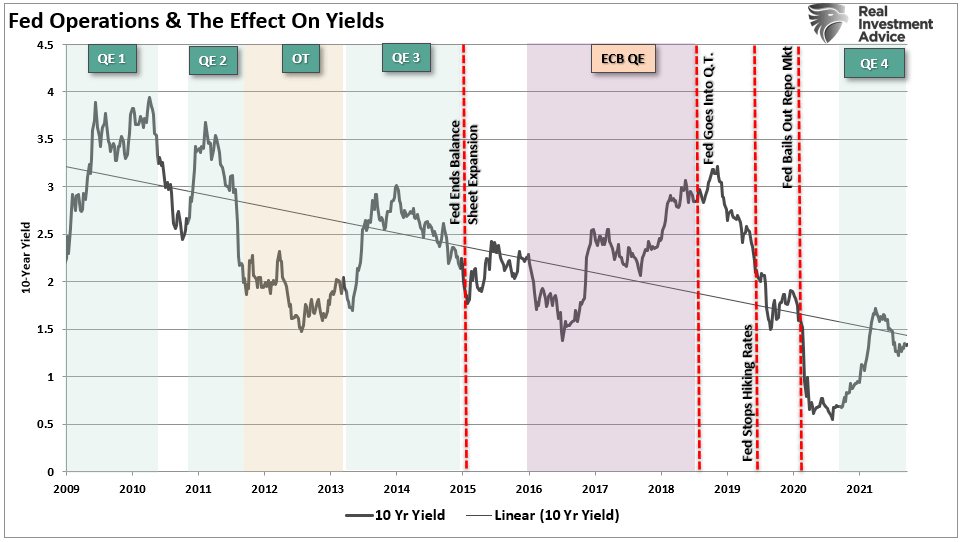 As if always the case with investing, timing, as they say, is everything.
Such is why, particularly with the Fed set to hike rates in 2022, we are looking for our next opportunity to add duration to our bond portfolios. Moreover, with the equity market grossly overvalued, we suspect that bonds will provide a chunk of our capital gains over the next couple of years.
There is little upside to the equity market given current valuations, slowing earnings growth, a weaker economy, and less liquidity. However, whenever the next recession approaches, yields will once again likely approach zero.
Got bonds?
The following is worth repeating:

“While anything is possible in the near term, complacency has returned to the market very quickly. However, there are numerous reasons to remain mindful of the risks.
Earnings and profit growth estimates are too high
Stagflation is becoming more prevalent (weak economic growth and rising inflation)
Inflation indexes are continuing to rise
Economic data is surprising to the downside
Supply chain issues are more persistent than originally believed.
Inventory problems continue unabated
Valuations are high by all measures
Interest rates are rising”
“Furthermore, as noted above, there is limited upside as the annual rate of change in the market declines.”
As I mentioned several times this week on the Real Investment Show broadcast, we have started the process of reducing portfolio risk by rebalancing positions that have become grossly extended.
Let me be clear. We took profits; we did not sell the entirety of our position. Therefore, our portfolio allocations are near fully invested. However, our cash position is growing as the market becomes more aggressively extended.

I make this clarification for two reasons.
An old axiom is that football is a “game of inches.” The same holds in portfolio management. Trying to throw a “Hail Mary” on every down will likely wind up costing you the game. Sure, you could potentially get lucky, but eventually, luck runs out.
As Jim Cramer noted last week when discussing taking profits:
“Bulls get fat, pigs get fat, but hogs get slaughtered.”
It’s another old Wall Street axiom that often gets ignored but probably shouldn’t be.
Original Post
Editor’s Note: The summary bullets for this article were chosen by Seeking Alpha editors.
This article was written by
After having been in the investing world for more than 25 years from private banking and investment management to private and venture capital; I have pretty much “been there and done that” at one point or another. I am currently a partner at RIA Advisors in Houston, Texas.

The majority of my time is spent analyzing, researching and writing commentary about investing, investor psychology and macro-views of the markets and the economy. My thoughts are not generally mainstream and are often contrarian in nature but I try an use a common sense approach, clear explanations and my “real world” experience in the process.

I am a managing partner of RIA Pro, a weekly subscriber based-newsletter that is distributed to individual and professional investors nationwide. The newsletter covers economic, political and market topics as they relate to your money and life.

I also write a daily blog which is read by thousands nationwide from individuals to professionals at www.realinvestmentadvice.com.