I bailed out of the market on Friday (7/16/21) … everything but precious metal and associated stocks. I might sell those too.
The only reason to sell out of your portfolio is if you think there is going to be a crash. Make no mistake, calling a crash is the hardest of all things to get right, but thus far I’ve been fortunate enough to get them all since the Dotcom.
It is easy to state that the Fed has got our backs and the trend is so clear it’s hard to justify calling a crash.
I’m calling a crash because of a long tortuous trail of research starting with the fact my portfolio was getting pummeled while the index wasn’t. This is the starting point.
First off, I’m a UK share specialist. I do US stocks but it’s not my ‘jam.’ However, as we know, all markets are connected, some at the hip. So why was I getting whacked when the stocks that were in my portfolio were mainly blue chips and – with 40 of them – highly diversified (clearly not diversified after all on some dimension)?
The answer is simple. They are high beta or perhaps better thought of as ‘risk on’ shares, and the market has been going risk off for two-to-three weeks and zapping me. It all kicks off from the last Fed meeting.
In the past, when my portfolio malfunctions it’s a sign that a big correction is on the way. Now don’t feel sorry for me, I have put back 10% of my profits from the last year. Last year was truly massive, so I’m not weeping into my Château Margaux. However, I’m telling you now because it looks like we are about to go into a very dangerous period.
The market could go ‘risk on’ or it could go SELL. If it goes sell, then it will likely crash.
This is my thought process:
Yikes the market is going risk off heavily and rotating into ‘risk off’ stocks. In the US, this is rotation into the Tera-caps like Amazon, Apple etc. The spicy stuff is getting crushed with SPACs and biotechs getting lashed. It’s the same picture in the UK.
There are two suspects and maybe they are in league:
Delta Covid and QE tapering.
So, let’s think about that.
Delta should be a known by now and priced in, so when you see airlines and hotels rallying you have to wonder if Covid can possibly be driving this rotation?
Taper tantrums? With the US saying that rising interest rates are months and years away and with Delta looming and national deficits and debt at incredible highs how can tightening be a thing?
Going to “risk off” is because something known but un-projectable has arrived. Is that Delta or another of the many variants of Covid to come? Is it sell in May and go away? Well, if it is I’ll be back in September.
I’ve been wrestling with this for some time now and have not been able to square what I’m seeing with what is ‘out there.’ Then I referred to Occam, the priest who believed the simplest answer is the one most likely to be true. What is the simplest answer I could dream up?
The simplest answer that doesn’t need an explanation is: “It’s the top of the market.”
That’s a sobering thought.
I’m not sure, but there doesn’t need to be a reason or a somebody to define when a crash happens. If it does, there will be a “he said this” or ‘they did that’ narrative, but what I’ve learnt over the years is accidents happen because of probabilities, and probabilities are driven by risk, and risk is mainly driven by systemics. The configuration of the system is more likely to make booms and busts than a somebody or a something.
I could spin you some rumours but what I see is a strong move to risk off and if whatever is driving that enters a liquidation phase then there will be a big correction and perhaps even a mighty crash.
This all kicked off in the middle of June when the Fed discussed elevated inflation; many interpreted that as a prelude to US interest rates rising. So that is the start of this ‘risk off’ move. However, even if the market is looking forward a year ahead, there is unlikely to be significant interest rates by then or any time soon. That in itself is no good reason for the markets to start heading for the exit.
… but they are heading for the exit and that might just be because the stock market is at its peak. With the market caps of companies like Amazon surpassing the GDP of whole countries such as Russia and Brazil, and its boss heading to space in his personal rocket, why couldn’t this be the top?
This is the chart that clarifies my position: 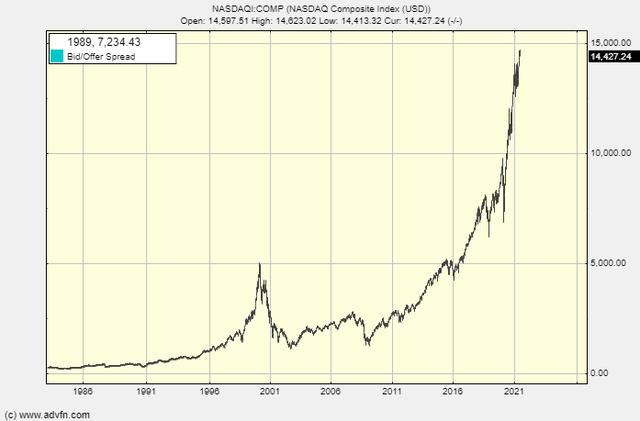 The current vertical is a replica of the Dotcom.
Bubbles are special and when they repeat their ascent you must be very wary indeed. Here is the Dotcom next to today’s Nasdaq chart: 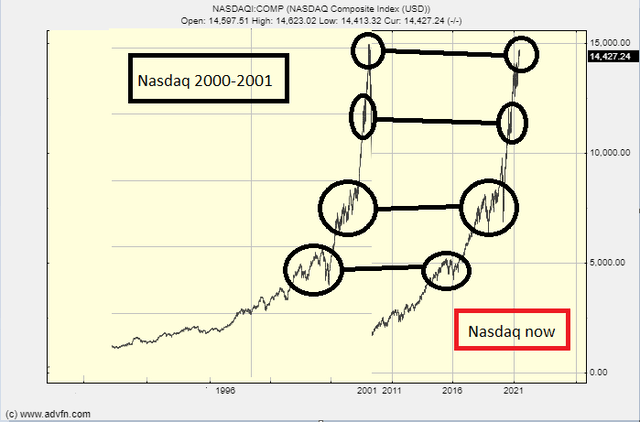 Right now, this is my roadmap and if we haven’t got a Nasdaq crash by late September, I’ll be sneaking back in. There could be some head room for the Nasdaq but the above looks perilous indeed.
Now I used this technique to call Bitcoin up and trade the top and many will think this idea has no value. Yet in my experience when markets bubble, or for that matter crash, they do so because they are broken by some new factor. The Fed broke the markets to the upside by its QE innovations, but at some point, the music has to stop. For me, now looks like a strong candidate for that and I’m out.
They say no one rings a bell at the top of the market. In the non sequitur manner of stock market saying, this means no one tells you when the market peaks or for that matter knows when it has.
“Well ding-dong!”
This article was written by
Disclosure: I/we have no stock, option or similar derivative position in any of the companies mentioned, and no plans to initiate any such positions within the next 72 hours. I wrote this article myself, and it expresses my own opinions. I am not receiving compensation for it (other than from Seeking Alpha). I have no business relationship with any company whose stock is mentioned in this article.
Additional disclosure: I own precious metal-associated stocks