Mr. Market’s most reliable warning signal is flashing “caution.”
I’m talking about bonds, Treasury bonds (TLT). As the deepest and most liquid asset class available, Treasury prices are set by some of the most sophisticated capital pools on the planet. The proof is in the pudding – with the bond market enjoying a perfect track record of predicting each recession of the post-War era (through the inversion of the yield curve, a topic for another day).
So when it comes to forecasting future economic trends and asset prices, the bond market reflects the proverbial “smart money”. In those times when the consensus is “all-in” betting on one economic outcome, and the bond market is going the other way, it pays to bet on the bond market.
That’s precisely the set-up we have in today’s market, where the consensus has priced in robust growth and inflation as far as the eye can see… but over in the bond market, traders are betting on deflation and economic contraction. In today’s article, I’ll explain why I’m siding with the smart money and bracing for turbulence.
The 2008 Financial Crisis provides a perfect example of the bond market’s predictive power…
Leading into the Fall of 2008, the consensus built into most market prices said that growth and inflation would continue running hot. Stock and real estate prices traded near record highs, and the infamous “commodities supercycle” was in full bloom.
Gold had just cleared $1,000 per ounce for the first time ever, agricultural products were making new highs across the board, and oil famously surged above $140 per barrel in June of 2008. Surging commodities prices helped push inflation from 1.9% in August 2007 to over 5% by mid-2008. In short, all available data and market signals indicated red hot growth and inflation… except for one – the bond market. Treasuries were priced as if things were about to reverse in a big, big way.
First, just a brief bit of background on bonds.
Yields on long bonds (i.e. 10-year maturities or greater) reflect two key variables: economic growth and inflation expectations. When Treasury traders expect rising growth and inflation, they sell long bonds. And given the inverse relationship between bond prices and yields, the selling pressure pushes prices down and yields up. Conversely, traders buy bonds when they expect slowing growth and inflation, pushing prices up and yields down.
So in an environment like late 2007 – early 2008, with robust growth and rising inflation, you would expect yields to be rising. But for an entire year preceding the Fall of 2008, the bond market went in the exact opposite direction. Yields on the 10-year Treasury peaked at 5.3% in late 2007, and fell to as low as 3.5% by the spring of 2008.
In other words, the 10-year Treasury traded below the inflation rate throughout the spring and summer of 2008. That shouldn’t happen, and when it does happen, it means one of two things: a) the bond market is happy to lock in a negative real return (unlikely) or b) the bond market expect an imminent flip from inflation to deflation. And it turns out, the bond market was exactly right in anticipating what became one of the biggest deflationary busts of all time – warning about it for a full year ahead in advance: 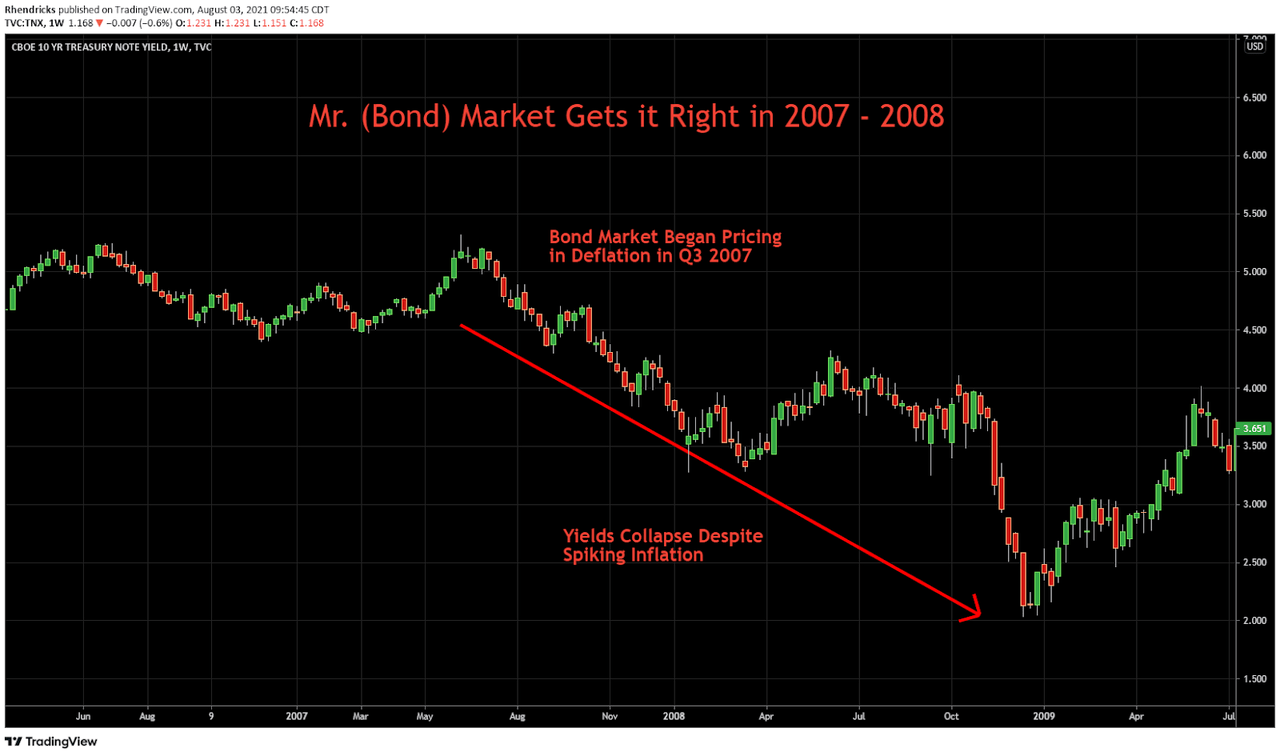 The bottom line: the market consensus bidding up real estate, commodities and stock prices across the board in mid-2008 was dead wrong. The bond market was exactly right, and the persistent decline in yields against a backdrop of rising inflation was the clear warning sign flashing for all to see.
And while history never repeats, it certainly does rhyme. Today’s macro backdrop and warning signals coming from the Treasury market bears a striking resemblance with the mid-2008 experience.
Just like in mid-2008, we’re living through a broad-based commodities rally across the board. Lumber recently pierced new record levels – up over 400% from pre-COVID levels. Agricultural products are trading at multi-year highs, and energy products across the board are back in bull markets. Meanwhile, CPI inflation has now broken out to the highest level since June of 2008 – clearing 5% in the latest data for June of 2021: 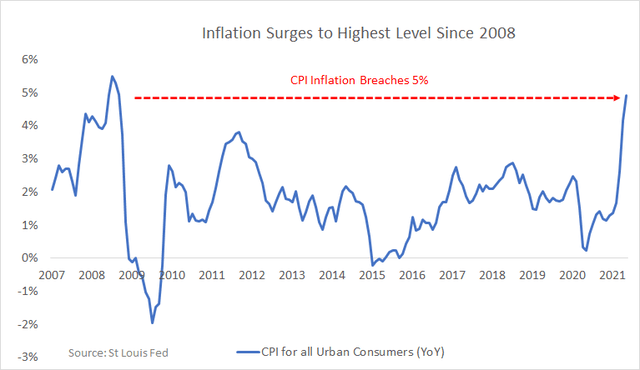 Now, it was a clear warning signal back in June 2008 when 10-year Treasuries yielded 4% against inflation running at 5.5%. But it’s a much, much bigger deal today when inflation is running at 5.3% and the 10-year Treasury is pushing down towards 1%. The only way this massive negative rate spread between inflation and long bonds can make sense, is if the Treasury market expects a major and sustained reversion back towards deflation. 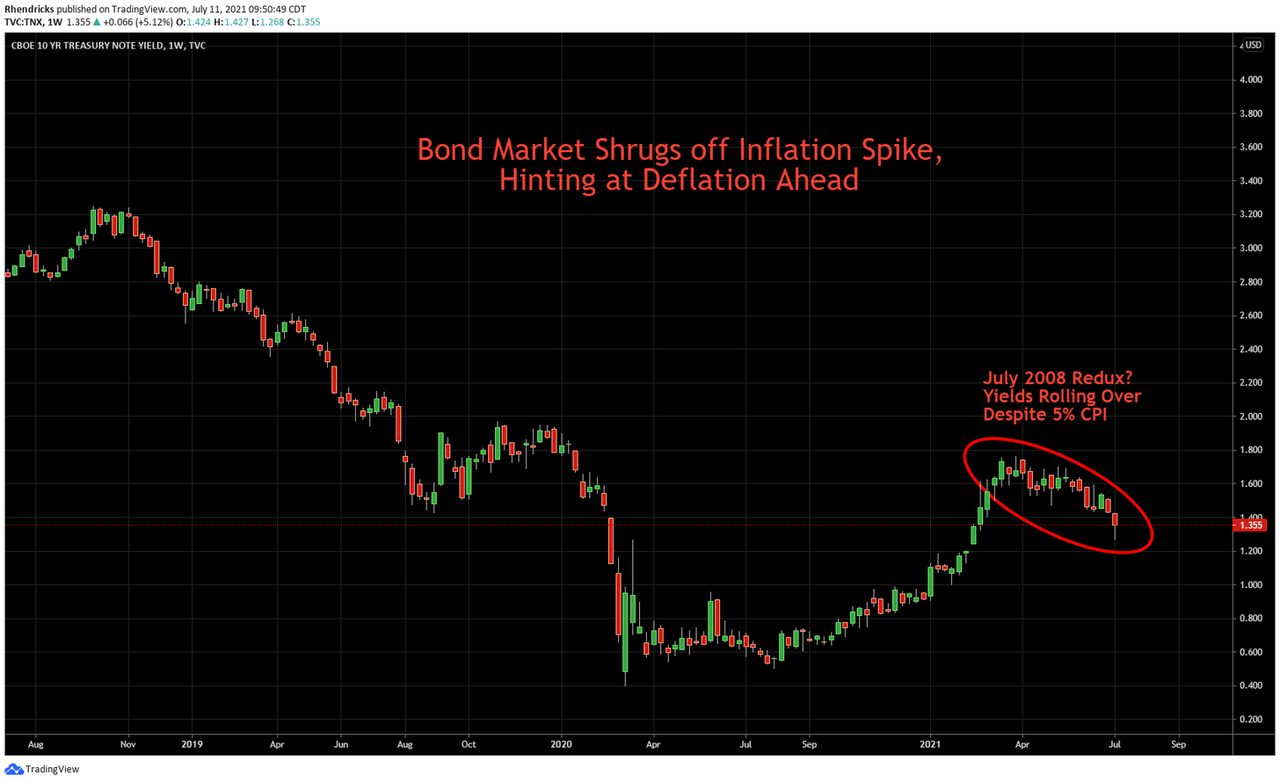 Needless to say, if Treasury investors are correct, that has massive implications for the entire “reflation” narrative bidding up prices of stocks, commodities, real estate and cryptocurrencies to name a few.
And when you dig under the surface of today’s superficial data prints indicating robust growth and inflation, you see that there’s plenty of reason for the Treasury market’s concern.
First, it’s critical to note the weak state of the U.S. economy going into the pandemic. Treasury yields had telegraphed this weakness – compressing from 3.2% in Q4 2018 to as low as 1.5% by late 2019. Falling yields corresponded with soft leading indicators in the macro data, like U.S. job openings – which peaked in Q4 2018 and declined throughout 2019. Meanwhile, the American consumer entered the pandemic with virtually zero emergency reserves. In 2019, 69% of Americans had less than 1,000 in savings – up sharply from 58% in 2018.
Given this vulnerable starting point, the Federal Government was forced to spend like a drunken sailor to offset an unprecedented economic shutdown. Between programs like the CARES Act, enhanced unemployment benefits, and one-off stimulus checks, over $5 trillion in COVID-19 stimulus flowed into the economy over the last 18 months.
So, of course, a $5 trillion spending spree can get you one hell of a bump in short-term consumption, GDP growth and inflation. Meanwhile, the biggest transfer payment came from allowing tens of millions of Americans to avoid paying on their rent, mortgage and student loan obligations for the last 18 months. Finally, COVID-related logistical constraints choked up supply chains while, at the same time, millions of Americans earned more money staying home than working their full-time jobs.
Thus, a perfect storm conspired to choke off economic production and logistical networks, while unprecedented stimulus and debt forbearance programs allowed consumption to run hot.
But the common theme across all of these unique factors boils down to one word… transitory.
In virtually every other aspect of economics and monetary policy, I generally take the opposite side of the Federal Reserve. But when it comes to today’s inflation readings, the objective evidence lines up to match their “transitory” view.
After all, we can see in the evidence that the vast majority of income growth that has supported higher spending is purely the result of transitory transfer payments. If you strip out the record transfer payments of the last 18 months, U.S. income is roughly flat with the pre-COVID era:

And we know these transfer payments are in the process of unwinding. Roughly half of U.S. states have already ended their participation in the emergency unemployment programs sponsored by the federal government in June and July. The remaining states will terminate the programs by the end of September, reducing benefits for 7.5 million Americans in the coming weeks.
Meanwhile, the federal eviction moratorium officially expired last weekend, on July 31st – leaving as many as 12 million Americans vulnerable to losing their homes. Sure, Joe Biden quickly announced an executive order to re-extend the deadline out to early October… but these are ultimately just can-kicking measures. Eventually, property rights for landlords will get restored, and the normal eviction process will resume. Finally, student loan debt relief programs are set to expire at the end of September.
So, the thesis here is simple – for the last 18 months, we’ve been living in a Potemkin Village economy. Unprecedented government interventions temporarily papered over a massive economic dislocation. This included trillions in both direct and indirect transfer payments, including widespread deferral programs on rent, mortgages and student loans.
But there’s a reason why government stimulus programs often get compared with taking drugs – they create a temporary high, but then you’re left with a painful hangover. The greater the binge, the more powerful the next day’s headache. And based on the unprecedented size of COVID-era stimulus programs, we’re in for one hell of a rude awakening when the withdrawal kicks in. Indeed, it’s already starting, based on a variety of leading indicators, including a crash in Citi’s (NYSE:C) Economic Surprise index: 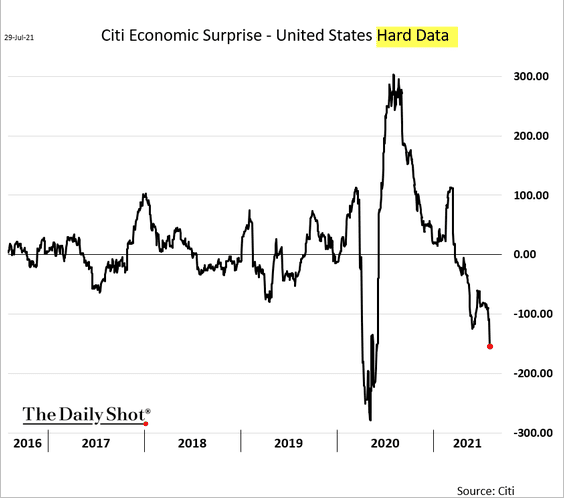 The bond market is starting to sniff out the wreckage that lays beneath the facade of today’s artificial economy. When the one-time transfer payments go away, all that’s left is one hell of a hangover as the bill comes due. If past is prologue, the bond market is right in betting against the consensus reflation trade, in the same way it was right to fade the “commodities supercycle” trade in the months preceding the 2008 Financial Crisis.
Going forward, my money’s on the bond market.
This article was written by
Disclosure: I/we have no stock, option or similar derivative position in any of the companies mentioned, and no plans to initiate any such positions within the next 72 hours. I wrote this article myself, and it expresses my own opinions. I am not receiving compensation for it. I have no business relationship with any company whose stock is mentioned in this article.